Excursion to the National Historical and Cultural Museum-Reserve “Nesvizh”. 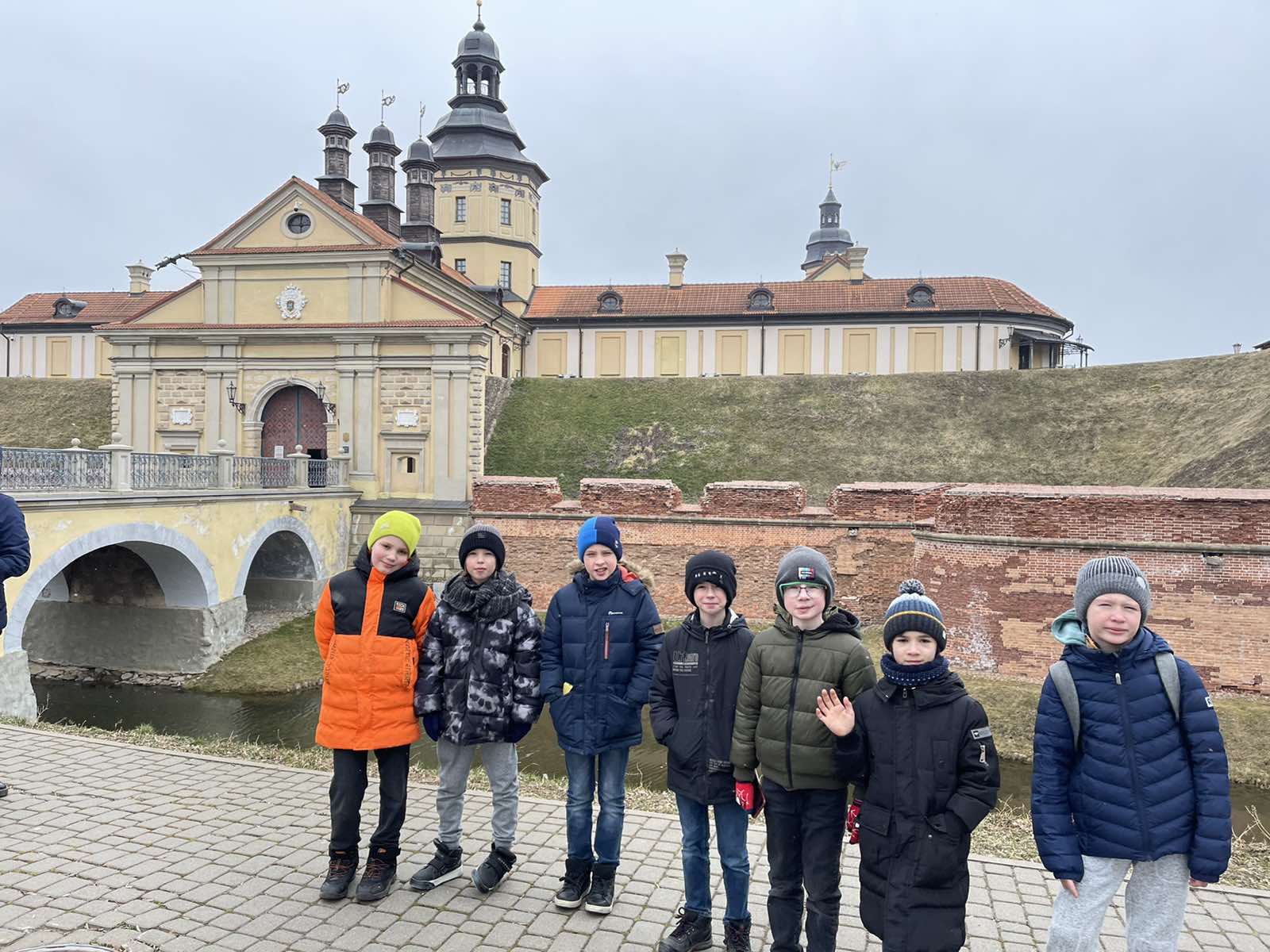 An excursion to the National Historical and Cultural Museum-Reserve “Nesvizh” became a beautiful ending to the spring holidays in Concord. We managed to visit the front halls and secret rooms of the palace complex itself, walked through the parks, saw the Nesvizh City Hall, the Slutsk Gate, visited the Farny Church of the Most Holy Body of God. The main thing is that the Concordians brought with them a lot of impressions and new knowledge about the princes Radziwills, about the architecture of the 16th century, about the history of Belarus in general. We publish a photo report about the trip and share some interesting facts about the Nesvizh Castle. 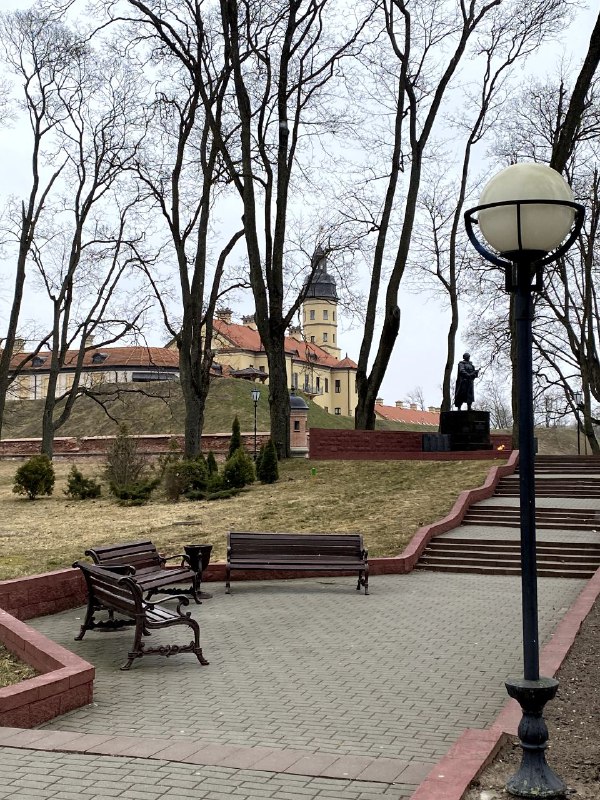 Information from the site https://niasvizh.by/

The appearance of a stone castle in Nesvizh is associated with the activities of Nicholas Christopher Radziwill the Orphan. He decided that the prince residence should be a powerful fortress, meet modern fortification requirements and clearly demonstrate the greatness of the Radziwill family. Therefore, instead of rebuilding the old wooden castle, the prince began to build a new one on a peninsula formed by two artificial lakes on the river Usha. 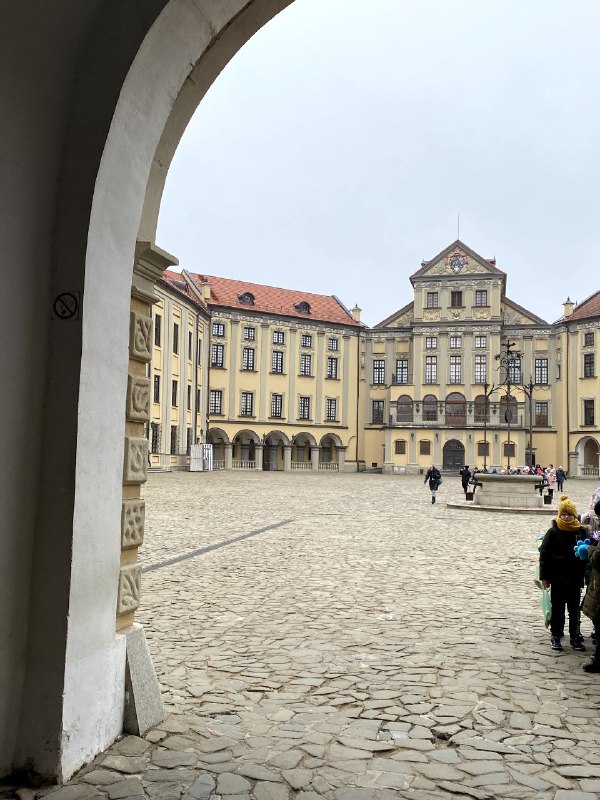 The work began in 1582–1583 and, primarily, was completed by 1600. There is no consensus about who was the author of the project. Previously, it was believed that the work was led by the Italian architect Jan Maria Bernardoni, but modern researchers only talk about his participation in the construction at some stages. It is possible that Nicholas Christopher Radziwill himself, who was seriously interested in architecture, was involved in the development of the project. 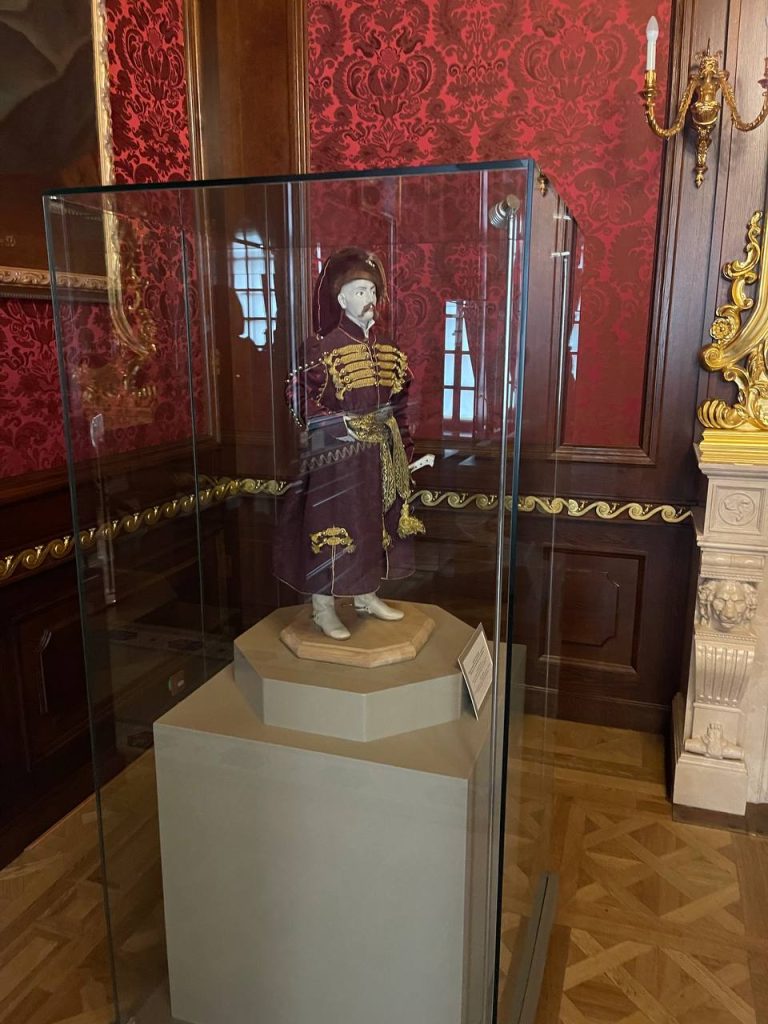 The constructed castle became one of the best fortresses of the Grand Duchy of Lithuania. According to the plan, it was a quadrangle surrounded by a high rampart with bastions at the corners and a moat with water. Opposite the entrance gate the prince’s palace was erected, next to it – an arsenal and a “kamenitsa” with a watchtower. Also in the castle there were barracks, a prison, a “lyudvisarnya” – a foundry, warehouses with provisions, a bakery. A wooden bridge led from the city to the fortress, which, if necessary, could be easily dismantled. About 30 guns were placed on the bastions, which made it possible to keep the adjacent territory under fire. All this made the castle impregnable. 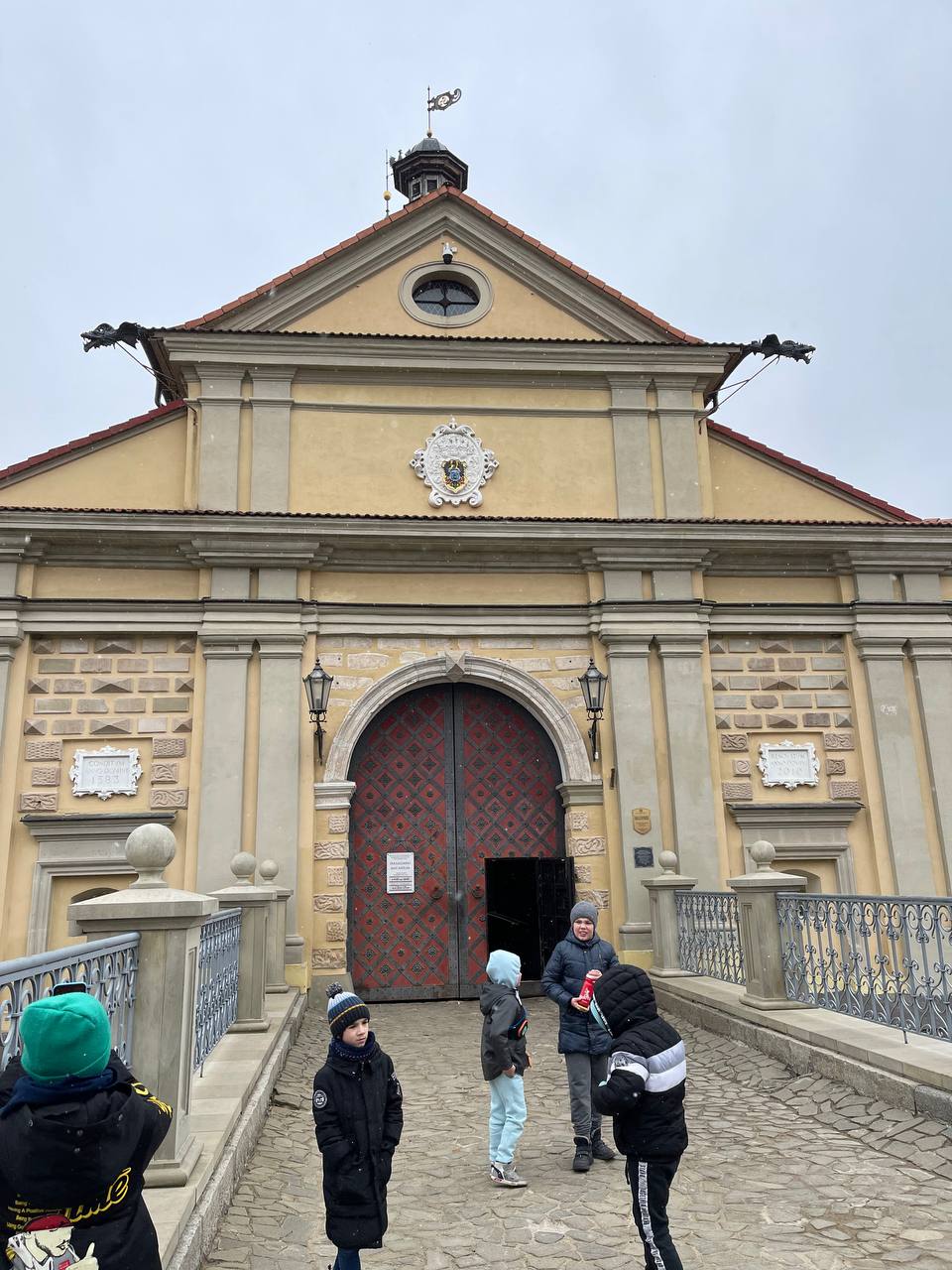 In 1660, the fortress withstood a two-month siege by Moscow troops, which significantly affected the course of the war. Nesvizh diverted some parts of the enemy troops from Lyakhovichi and averted the threat from Slutsk. Taking into account the role that the castle played in those events, the Soym of the Commonwealth freed the city from military camps and taxes for 4 years. 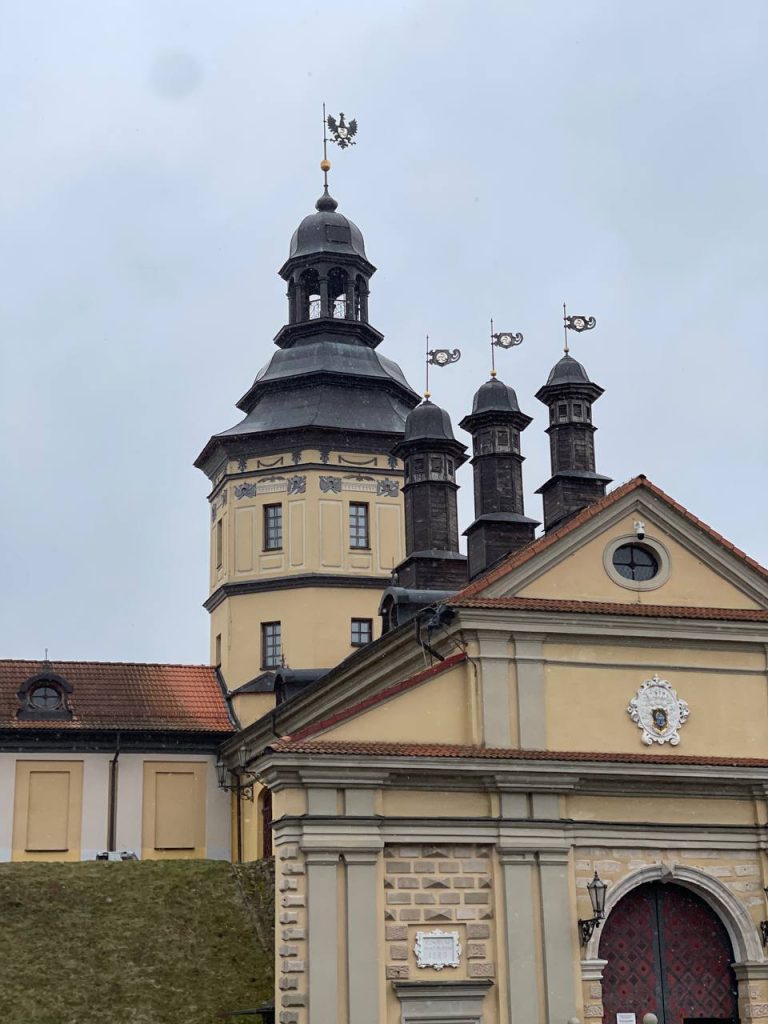 During the Northern War, in 1706, the Swedish army led by Charles XII approached the castle. The commandant, under whose command there was only a small squad of professional military men, accepted the king’s ultimatum and opened the gates. The Swedes plundered the castle and completely destroyed its fortifications: the ramparts were torn down, the bastions were blown up, the buildings were burned. 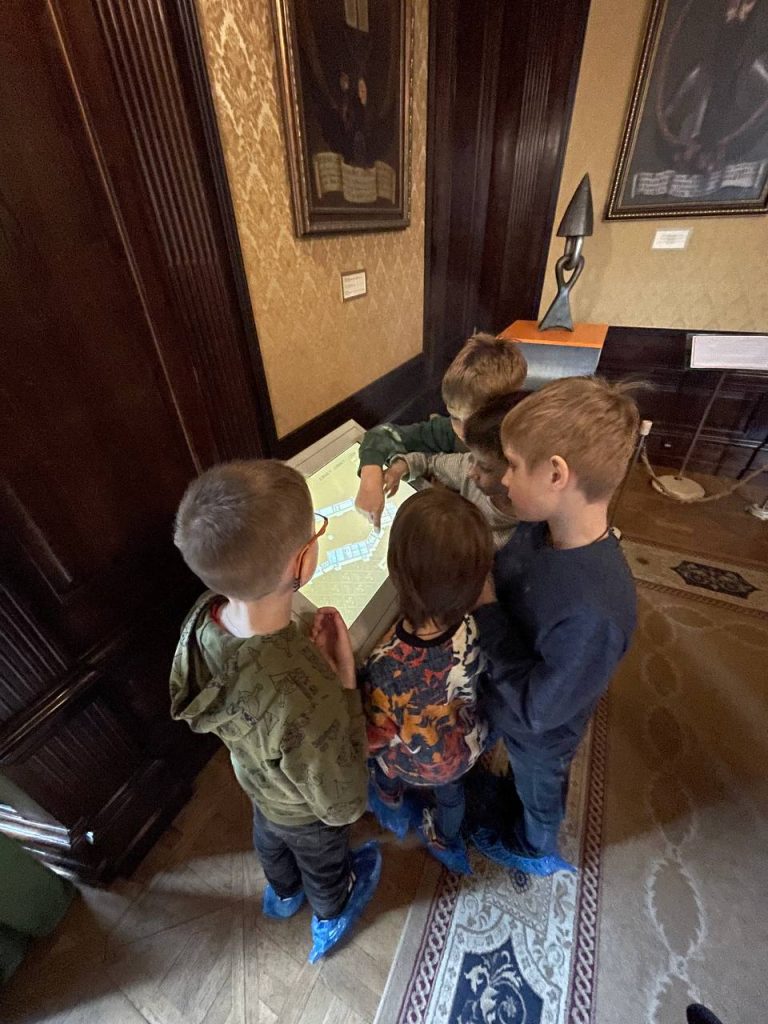 Restoration work began in the 1720s during the time of Mikhail Casimir Radziwill Rybonka. The rebuilt palace, the buildings of the arsenal and the kamenitsa were connected by galleries into a single whole. At the same time, the defensive function stepped back into the background, now the prince residence has become, first of all, the center of cultural life. A special Theater Hall was created in the palace, a chapel of the icon of the Mother of God of Loreto, and a printing house operated for some time. There was a rich library, a portrait gallery, collections of weapons and armor, coins and medals. Architects Kazimir Zhdanovich, Maurizio Pedetti and others worked in the castle. In 1784, especially for the arrival of King Stanislav August Poniatowski, the Royal Hall was created, a number of rooms were decorated. 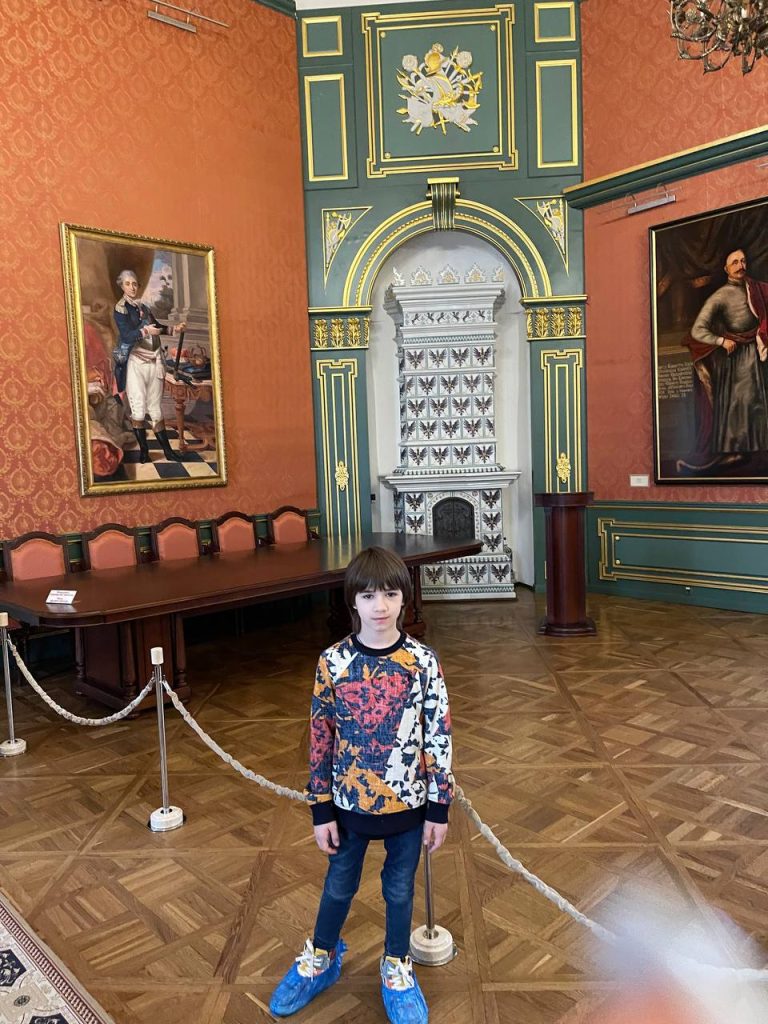 After the castle was sacked by Russian troops in 1812, a long period of decline stepped on. For almost half a century the Radziwills did not live in their residence. Only in 1865 they first came from Berlin to the land of their ancestors. Maria Dorota Radziwill wrote in her memoirs: “When I arrived at the castle, I found a real decline! Even the ditches that surrounded it were so full of garbage that they were equal to the ramparts … The castle was completely uninhabited. The roofs were full of holes, water was flowing everywhere, the ceilings had collapsed in places, some of them were barely holding on, the stones with which the courtyard was paved were turned out in many places, and everything was sinking in incredible mud. But, despite this, I saw that the castle can be revived … “. 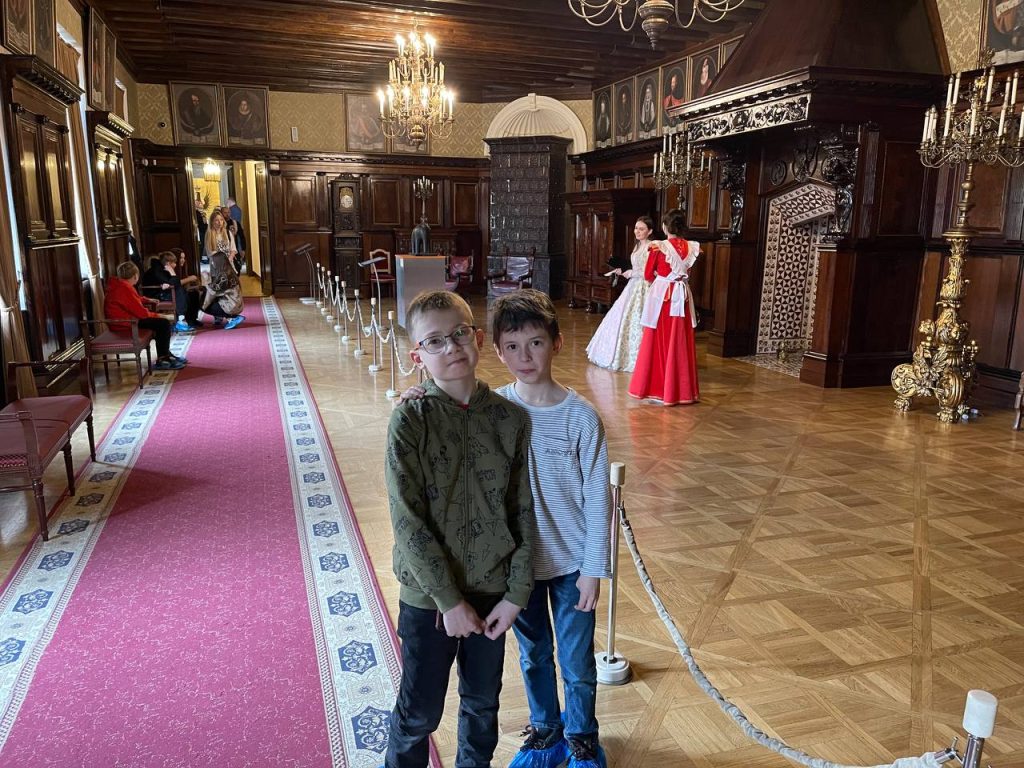 Thanks to the efforts of Maria Dorota, life returned to the Radziwill residence. The interiors of the halls were restored, some collections were returned, in particular, family heirlooms taken to the Hermitage.

During the First World War and subsequent revolutionary events, the castle was not significantly damaged. During the period of the Second Polish-Lithuanian Commonwealth, for a short time, it became the center of public life. In 1926 Marshal Jozef Pilsudski visited it, at a reception he raised a toast to the Radziwill family : “Let them remain as eternal as these old walls.” 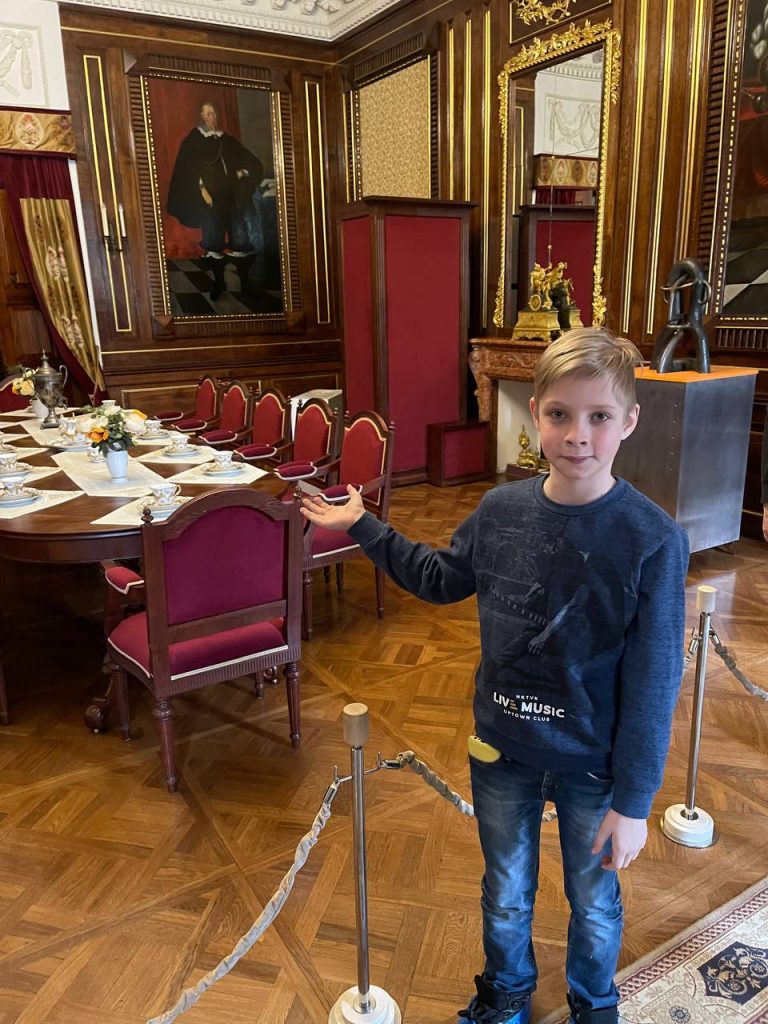 In 1939, with the establishment of Soviet power, the fate of the castle remained uncertain for a long time. It was planned to open a museum, a road technical school, a rest home here. The collections, the library, the archive were transferred to various institutions, and a significant part of them, in general, was lost. During the years of German occupation, a military hospital operated in the castle. After liberation in 1944, a decision was made to organize a sanatorium, which functioned until 2001. 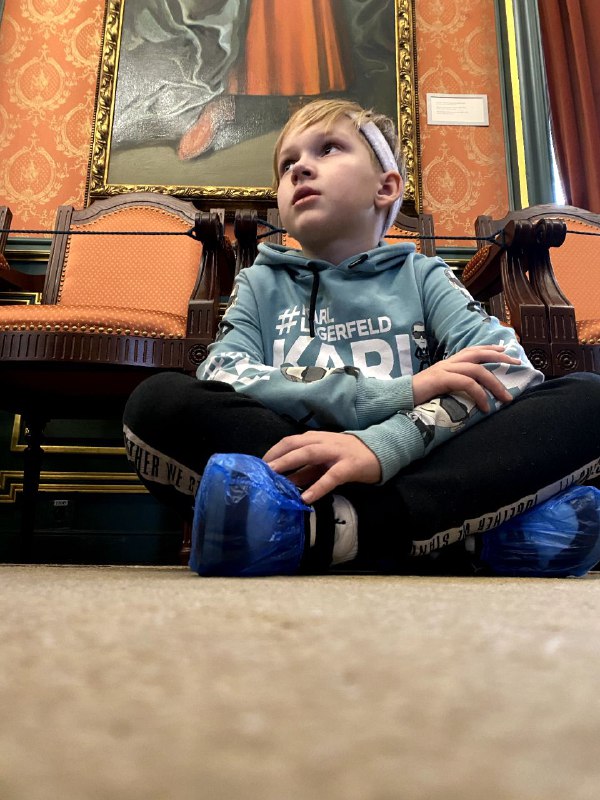 In 1993 the government of the Republic of Belarus adopted a resolution on the creation of the Nesvizh Museum-Reserve, and a plan for the restoration of the palace was developed and approved. On July 15, 2005, the architectural, residential and cultural complex of the Radziwills was included in the UNESCO World Heritage List as “an outstanding example of an architectural ensemble that illustrates a significant period in the history of mankind.” After the completion of restoration work, in July 2012, the exposition of the museum-reserve “Nesvizh” was fully opened to visitors. 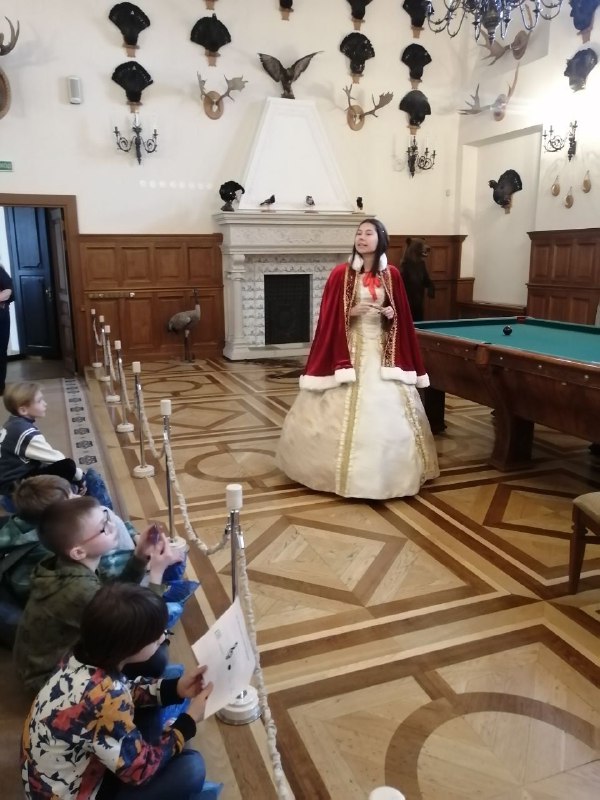 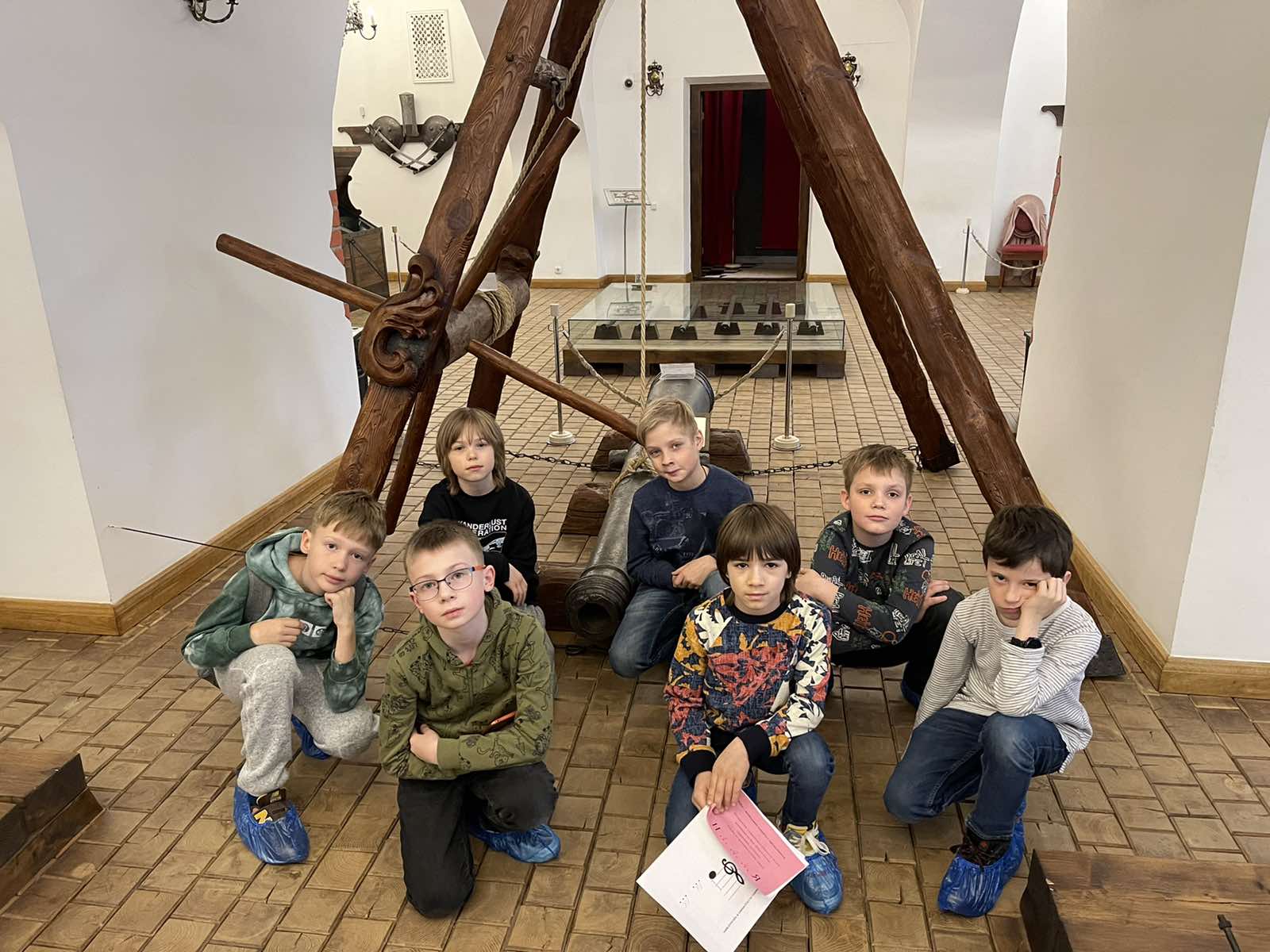 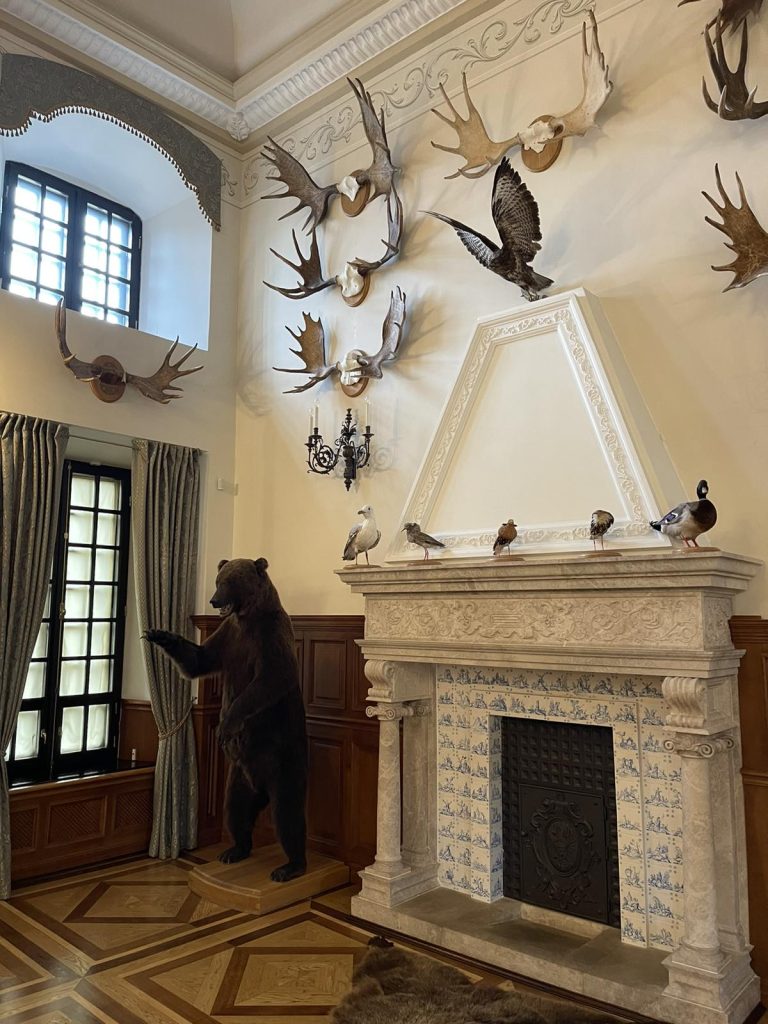 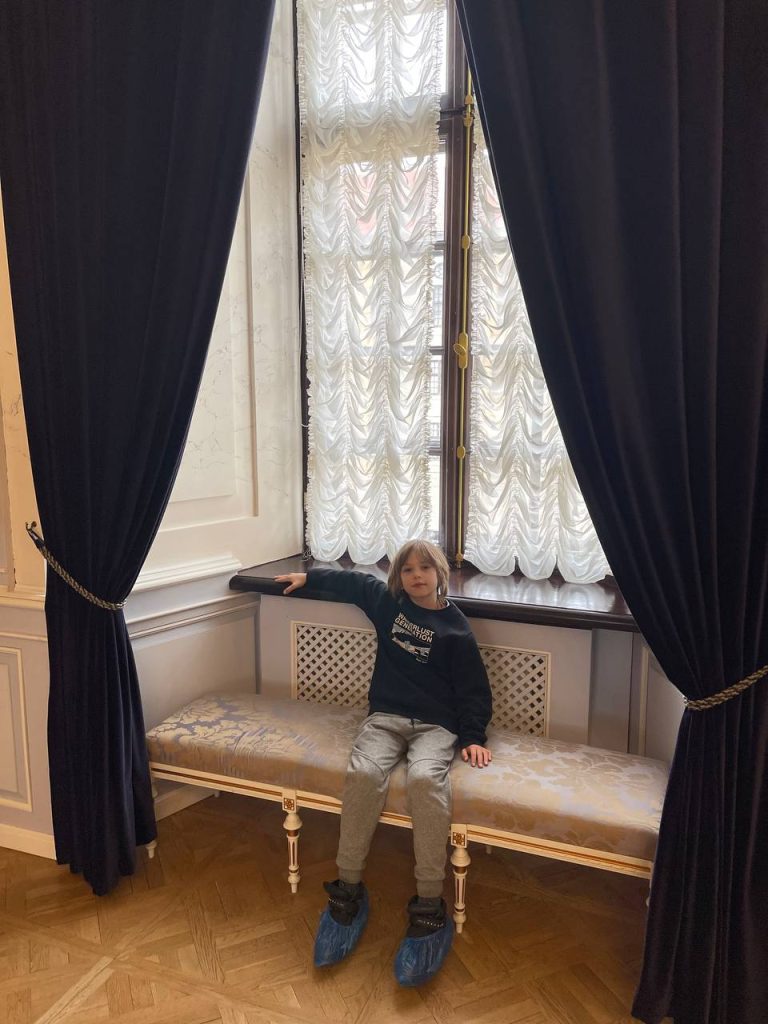 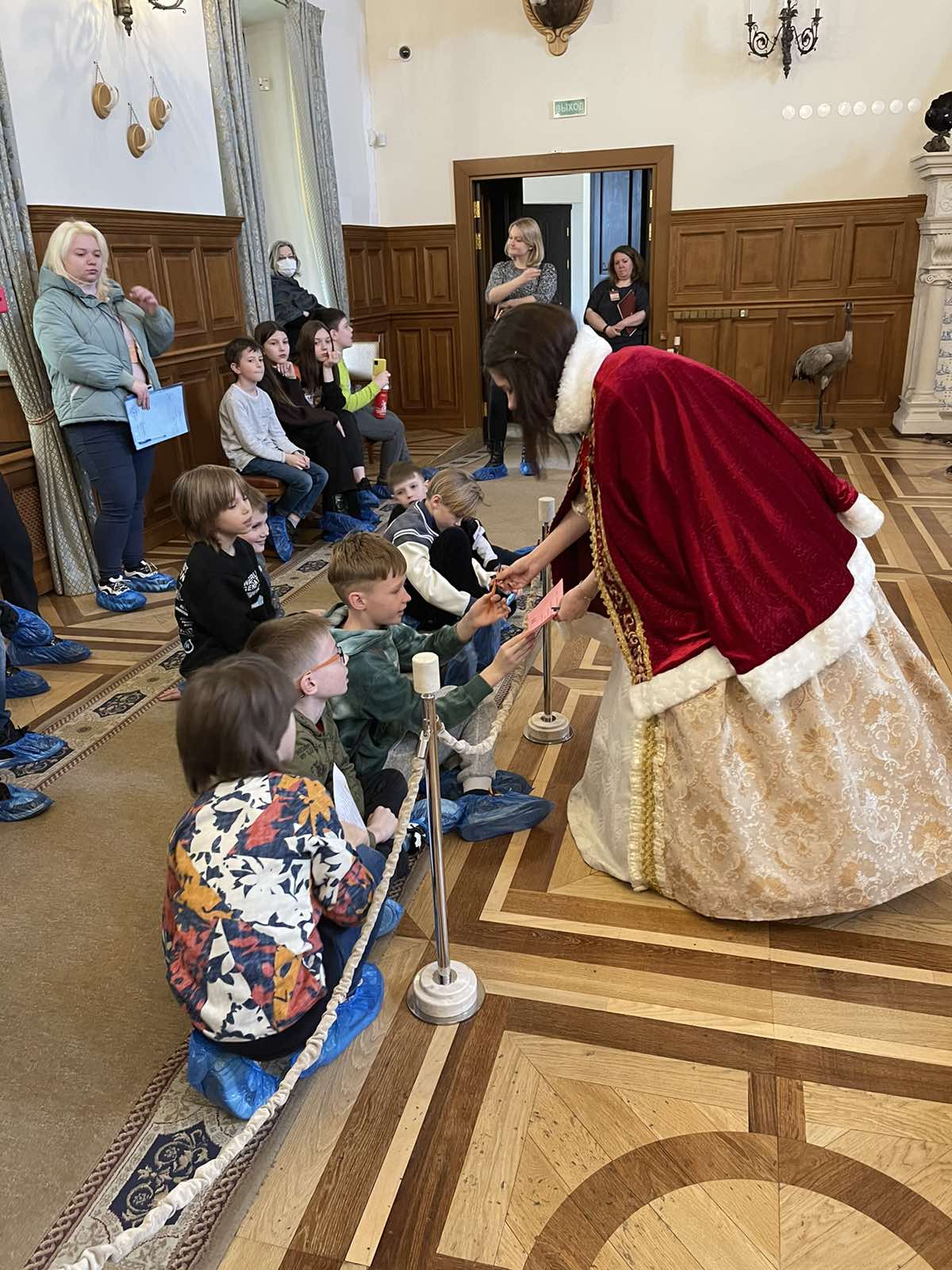 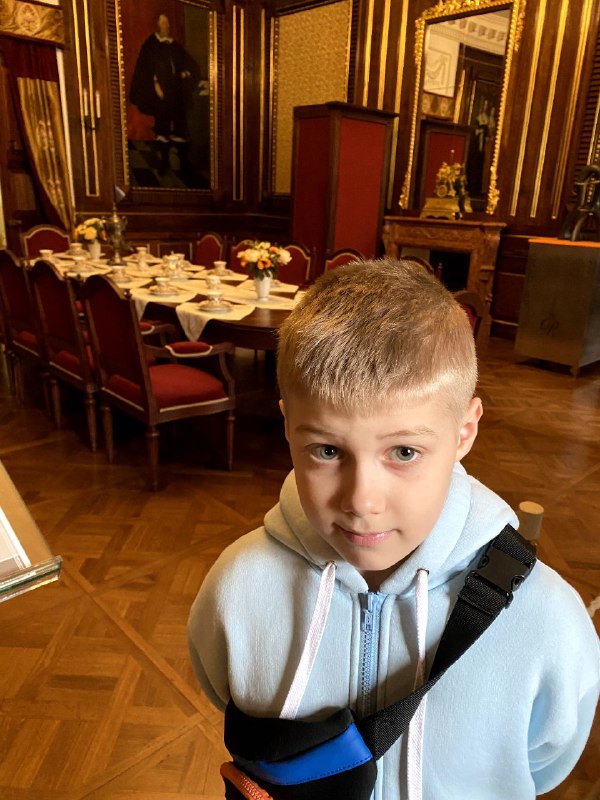 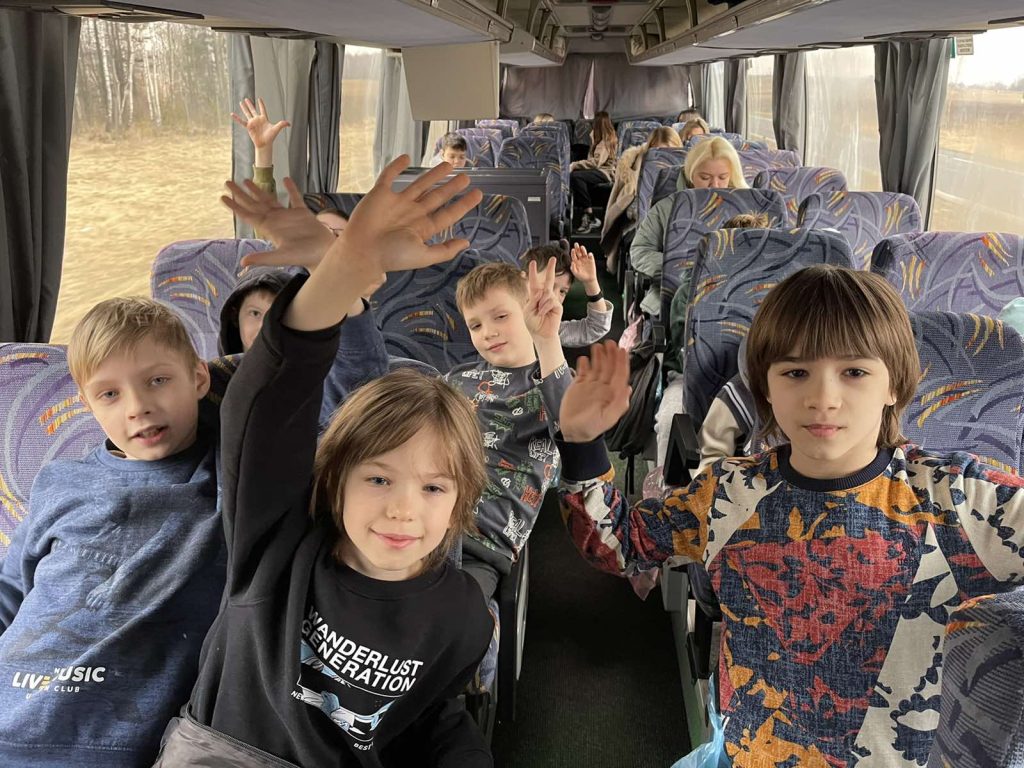